Andrew Weatherall’s brother Ian kindly shared two more tracklists from Andrew’s notebooks this week, so I spliced the songs together and uploaded them to Mixcloud.

Following last week’s Songs for Swinging Subversives from 1982, we were given two mixes from 1985. They were less diverse than the 1982 tape, with one focusing on indie pop/rock and the other a soul/disco extravaganza.

The Disobedience as Virtue indie-flavoured tape made for Steven Maise still finds space for synthpop-disco from Bronski Beat and contemporary rockabilly from 4 Guitars from Texas among indie favourites such as Everything But The Girl and The Pogues, plus the debut single from James and and three tracks from the (then) newly-formed Smiths.

The hardest to find track and possibly the most exciting is this post-punk funk from The Bushmen.

Here’s the mix in full. 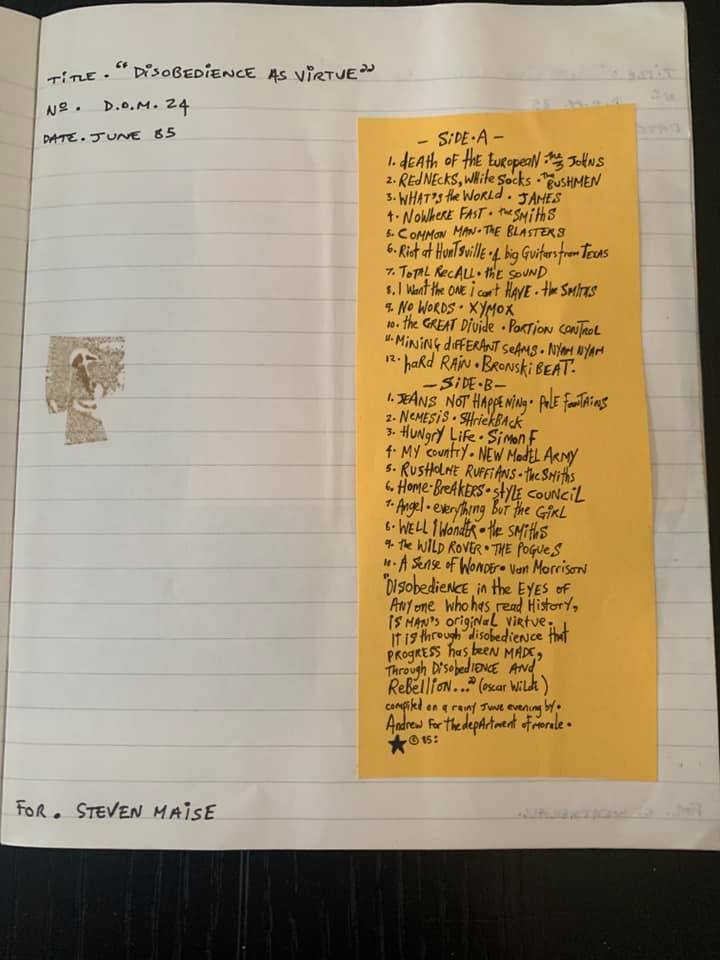 The disco-soul tape made for Niel Ford and titled ‘Being poor, being black, being under attack…’ certainly got my friends on Facebook talking. After uploading it at about 5pm, it had me (and others) dancing round the kitchen making dinner.

It’s not without soul-glo cheese in the form of Eugene Wild and Heatwave (“Never be afraid of the cheese,” Weatherall once told an interviewer) but it has a slew of slightly leftfield choices from the likes of Womack & Womack, Ike & Tina Turner, Stevie Wonder and Isaac Hayes, plus stone cold classics from Otis Redding, Marvin Gaye, The O’Jays, The Temptations and Gil Scott-Heron.

Fifteen years later, when Weatherall released his brilliant 9 O’Clock Drop compilation of post-punk grooves he told Jockey Slut: “I know the importance of disco, for example, in the history of music. But when the punk rock heroes you grew up with have t-shirts on saying ‘disco sucks’ it doesn’t tend to become part of your culture. I like some of the old disco stuff, but unlike this [the 9 O’Clock Drop tracks], it just wasn’t part of my cultural reference first time round… Being from the suburbs I heard music that was influenced by black American culture before I heard the original stuff. 23 Skidoo before ESG, that sort of thing.”

Clearly by 1985 (at the age of 22), he had got his head round the disco soul thing. This would have been him looking back at history a bit, rather than necessarily creating a contemporary mix of current favourites.

However, Weatherall did talk a lot of crap in interviews sometimes. Later in the interview he mentions AR Kane “not standing the test of time so well”. I’d kinda agree but for A Love From Outer Space, which Weatherall and Tim Fairplay would go on to cover as The Asphodells.

Two sides of the young Weatherall then. 1985… just two years from Frankie Knuckles releasing Your Love in May 1987 and Phuture releasing Acid Tracks that September. Shoom would open three months later and Weatherall’s life would change forever. So would ours’.

View all posts by MFL Steve